Masseuse or Masseur vs Massage Therapist 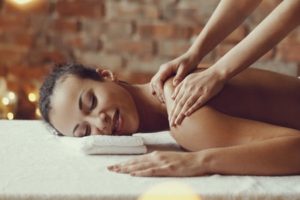 These words are big for the massage industry, so how do we correct and not offend clients that call you a Masseuse (woman) or a Masseur (man) when referred to as a masseuse or masseur. The words mean to knead or Rub muscles. To understand the reasons these terms are unsavory it calls for a bit of a history lesson and an explanation these terms. The terms Masseuse or a Masseur came about in France in the late 1800’s and they remained popular in this country through most of the 20th century, however the word/terms were hijacked by prostitution industry.

The original term referred to and described men and women who made a living by providing massage and were paid for their work, it did not mean happy endings. This was not meant as a derogatory term it was a legitimate business and treated as such. People have been providing and receiving massage therapy for centuries, for over 2000 years. Massage has its origins in African, Chinese, Greek, Hawaiian, Japanese, Indian among other cultures. Massage has been used as more than just a treat or luxury but as a healthy therapy.

Between the 1930’s and 1950’s the terms Masseuse and Masseur got hijacked by the prostitution industry in order to advertise and promote their business prostitution under the guise of a legitimate massage business. So, while both these terms are not wrong when used in the pure sense, it’s still looks at by most the population as unsavory and associated with happy endings. Hence the dilemma for trained massage therapist.

In today’s world, unfortunately there are still people out there that think massage therapist do happy endings, and this might put a massage therapist working alone in an unsafe situation. A massage therapist might find herself having to defend herself from a client that is either overly eager, aggressive, or just one that doesn’t realize that what they are looking for is not something a massage therapist offer or provide. Most of these clients usually don’t retaliate once a therapist explains it to them, they don’t provide that kind of service and asks them to pay and leave but some do not respond kindly.

The term most Massage Therapists in the industry today prefer is Massage Therapist because a legal license protects that title to practice. The license tells everyone that the therapist has credentials to back them up, that the therapist has been to school and graduated from a massage school or program. The massage therapist has passed a licensing exam and paid for a license to practice and participate in obtaining continuing education units. These Massage Therapists also follow standardized rules and ethics approved by a licensing board. Most Massage Therapist also have liability insurance as well as follow a strict code of conduct. A therapist that doesn’t and are found working outside the scope of their practice or outside the law will risk losing their license and have their privileges revoked by the state or governing body.

Most Massage Therapist understands that the public isn’t using the term maliciously and the just need to be educated when it comes to these terms. Most massage therapist would rather not be referred to as a Masseuse or a Masseur at the same time they don’t make a huge deal about it. We know this is not meant as an insult or meant to be derogatory, 99% of the time and we gently correct the client or person. Using the term might elicit a humorous explanation of the correct term or by referring to ourselves as Massage Therapists.

Are you ready to give your body what it needs? Book your appointment online now!